The first ever animals I made out of felt were horses and ponies. They were 2D, roughly blanket stitched and it took me several ponies before I figured out how to effectively stuff them - legs included! One in particular had a 'gammy' leg which was so poorly stitched that it ended up all wonky. I still have them all...perhaps I will photo them as an update (or prequel) to this post.

It makes sense therefore, when I got back into felt craft more recently, that my initial attempts at 3D animals were of ponies. The photo below is the first and will probably always be my favourite, although a little under-stuffed! As with many of my creations involving these colours, the picture just doesn't do it justice as it doesn't quite capture the rich purple in contrast to the blue. The felt is in fact flecked with shiny purple and blue ribbon and it is the colours that make it my favourite piece! It is a little different for me, as I normally make animals in their natural colour. 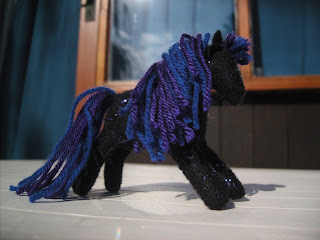 Which brings me nicely onto a trio that I made, based on three real horses. It came about after I listed one of my ponies on Ebay - although it did not sell (as sadly my items never do) - a lady contacted me and asked if I could make hers and her friend's horses if she sent photos. I took up the challenge, and a challenge it was! The most difficult part was making the 'feather' around the grey horse's legs but I persevered and I was so pleased with the result. I hope you like these little beauties too - I was sad to send them away! 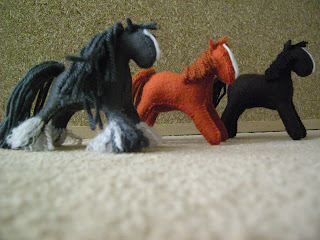 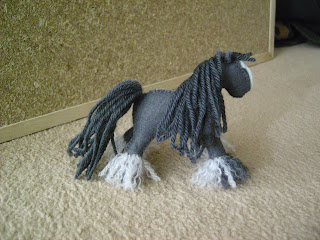 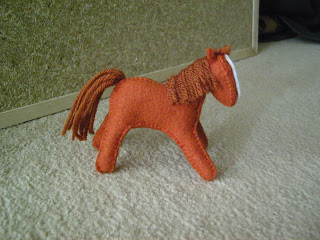 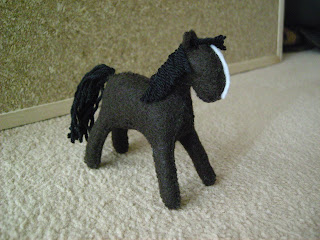