Since I have been in Canada, I have been busy crafting away in my spare time, at first just to keep my fingers busy! I had some really nice comments on my pieces and it was suggested that I could sell them alongside the t shirts that are sold to guests of the kayak company I am working for.

It took a little while, but I finally have enough pieces to put a bundle in with the t shirts! The bundle consists of large killer whales, small killer whales, dolphins, little blue whales, and killer whale fridge magnets (which aren't in the picture I have here). They range in price from $4 to $15 and the best part is that I am donating all the proceeds to OrcaLab, who record the movements and vocalisations of the killer whales in the Inside Passage at the north end of Vancouver Island. 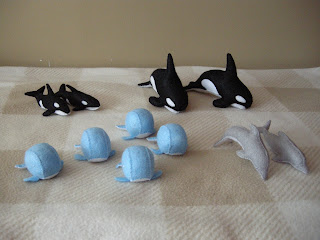 I was lucky enough to visit and have a tour of OrcaLab on one of my kayaking trips, which was a dream come true for me! I have known about their research for some time but did not think that I would have the opportunity to visit even while being in the same area as them. Check out OrcaLive which allows you to listen to the mesmerising calls of the killer whales in the area when they are close to OrcaLab's underwater microphones.

Last week I took a whale watching boat trip and had some fantastic encounters with the killer whales. There are strict whale watching guidelines which say how close you can motor your boat or paddle to the whales - but there is nothing to stop them coming to see you if you are just floating there - which is what happened! I took a few photos but mostly I was just taking in the experience and committing it to my own memory. 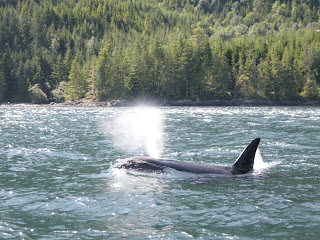